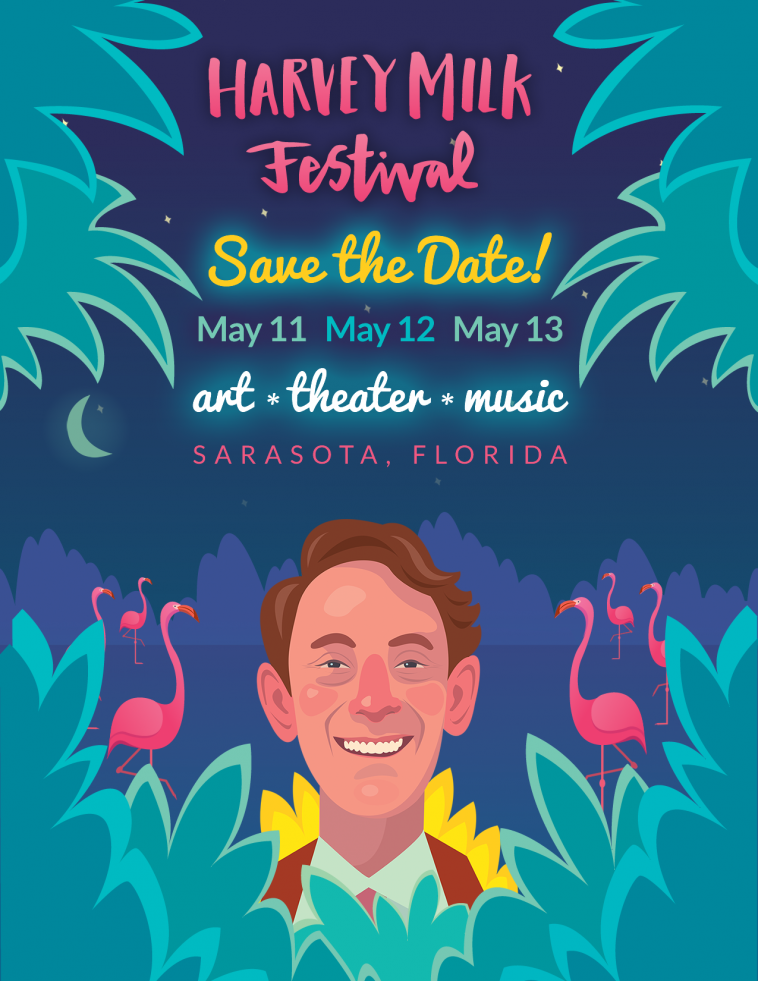 Harvey Milk Festival (HMF) celebrates its tenth anniversary alongside the fiftieth anniversary of the Stonewall Riots. HMF features a variety of attractions including live music, film, performing and visual artists, speakers, and vendors designed to engage a large and diverse audience. New to this year’s events are the inaugural Run4Love and its first historical exhibit, Before Harvey: An Exploration of National LGBTQ+ History. There are five main HMF events and they range from May 4-11, 2019. Visit Sarasota County is proud to share this news on behalf of HMF.

On May 4, the inaugural Run4Love extends support for the LGBTQ+ community and its allies as participants illuminate the bridge with their individual glowing devices and costumes. The goal is to capture amazing footage of the community lighting the bridge together, along with a special projection on the bridge itself. Harvey Milk Festival strives to achieve the same creativity and ingenuity of prior proponents of LGBTQ+ equality.

From May 9-11, the Before Harvey: An Exploration of National LGBTQ+ History photo exhibit will showcase at The Art Center Sarasota. As the 50th anniversary of the Stonewall Riots quickly approaches, this exhibit will showcase the diversity within our communities by sharing a selection of LGBTQ+ artists. HMF aims to stir conversation about the history and cultural influences of LGBTQ+ trailblazers. The exhibit will launch with a panel discussion featuring premier academic figures in Florida. Panellists are David K. Johnson, esteemed author and Associate Professor of History at the University of South Florida; Dr KL Broad, Associate Professor of Sociology at University of Florida; and Dr Nick Clarkson, Associate Professor of Gender Studies at New College of Sarasota.

On May 10, The BASSment, moderated by Lisa L Boogie Brauford, will include an entertaining night of art forms including spoken word, performance art, dance, film, and music. The evening will be hosted by a collection of artists from Tampa, Orlando, St. Petersburg, and Sarasota.

On May 11, there is a fundraiser event to benefit HMF, a champagne brunch at Sarasota’s new restaurant, Sage SRQ.

HMF will conclude the evening of May 11 with a downtown concert in JD Hamel Park featuring ten emerging musicians making sonic waves across the US Headlining bands to appear include GGOOLLDD, Louds, LANNDS, Linqua Franqa, MONTERREY, Lemón Royale, and local Sarasota bands, MeteorEYES, Divine AF, The Pretty Dirties, and Kristopher James. The keynote speaker Nathan Bruemmer, JD, is known for his work as Executive Director for ALSO Youth, St. Pete Pride Board, and his continuing work with Equality Florida as a member of the TransAction Advisory Board. Nick Sirotich will also be doing live art during the festival.

The cost affiliated with each HMF event vary. Visit this link for pricing and more information.