Founders Entertainment is proud to announce the lineup for the 2018 Governors Ball Music Festival. The eighth annual edition of New York City’s very own homegrown fest will take place from Friday, June 1 through Sunday, June 3 on beautiful Randall’s Island Park. Featuring performances from Eminem (his first headline show in NYC since 2010), Jack White, Travis Scott, Yeah Yeah Yeahs, Halsey, N.E.R.D. (first NYC show since 2010), Khalid, the worldwide debut of Silk City (a new project from Diplo and Mark Ronson), a reunited The Gaslight Anthem performing their breakout album The ‘59 Sound, and many more, Governors Ball will showcase over 65 artists throughout the weekend. 3-day GA and VIP tickets (including payment plan options) are available now via this link at special “Announce Day” pricing until 11:59:59 PM EST. Regular pricing begins January 4 at 12:00 AM EST. Full festival lineup and poster below. 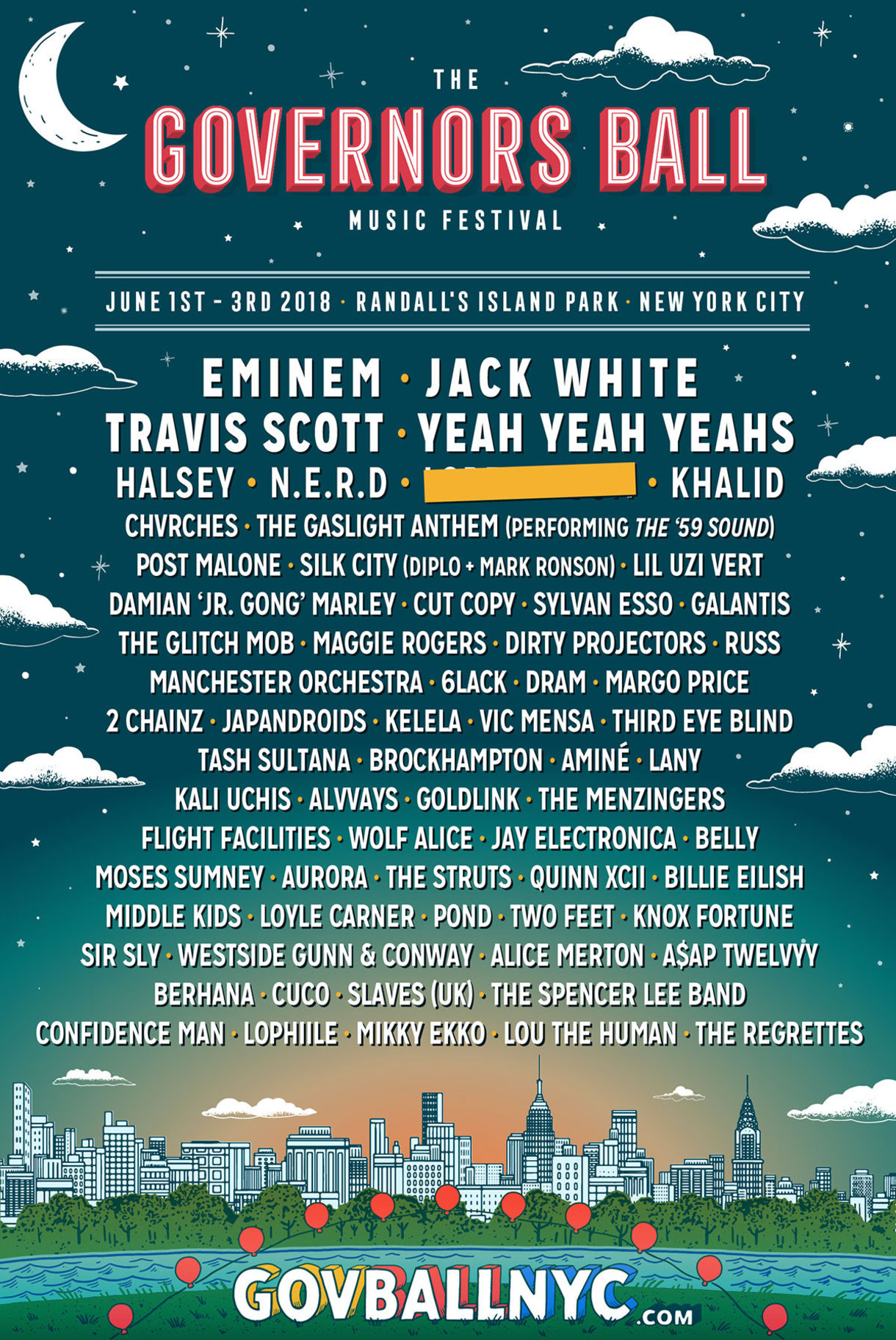 This June, Governors Ball will celebrate its eighth consecutive year as New York City’s premier live music event, and by acclamation, one of the top music festivals in North America. “Governors Ball is New York City’s festival,” wrote Nylon following last year’s stellar event, which featured many show-stopping performances including a memorable set from Childish Gambino, his only North American performance that year. “It combines the best of what this sleepless city has to offer, from food vendors to talent and downtown style.” The 2017 festival also left performers enamoured as well, with Lorde proclaiming that that Governors Ball was “on some magical spiritual shit.”

This Summer, Founders Entertainment will continue working overtime to bring that “magical spiritual” vibe to Governors Ball patrons at the festival grounds on Randall’s Island Park (supported, maintained and programmed by the Randall’s Island Park Alliance). The 2018 festival will feature a signature lineup of the best food NYC has to offer, craft beer and cocktail options, and the lawn games, mini golf (two unique 18 hole courses), street art, After Dark concert series, and the “only in New York” experiences “Gov Ball” has become known and loved for. The festival will also add two new 21+ areas, building upon last year’s introduction of the popular “Best Kept Secret” 21+ oasis.

Governors Ball has focused on giving back to the greater New York City community since inception and will continue that trend with the 2018 festival. Helmed by born and bred New Yorkers, Founders Entertainment will look to build upon their efforts surrounding last year’s event. In 2017, Governors Ball pumped a record-breaking $62.4 million into New York City’s economy, bringing the past four years cumulative total (2014-2017) to $185+ million dollars. The festival also created more than 430 jobs and generated $31 million in wages. Governors Ball continued its long track record of giving back to the community by working with and donating to local organizations, non-profits, and community groups as well. More information on Governors Ball’s economic impact and community engagement may be found via this link.

In addition to being accessible by MTA bus, bike, cab, and ferry service from Mid-Town Manhattan to and from the festival grounds, the festival is accessible to pedestrians via the RFK Bridge, the 103rd Street footbridge, and Bronx Randall’s Island Connector.