The Goldie Awards are here!

hursday, Fool’s Gold will have the first Goldie Awards ever. It is the first annual DJ & Beat Battle. There have been things like it in the past, but not of this magnitude in the present day. Along with the independent label, VICE subsidiary’s THUMP and NOISEY, and TMWRK are fellow presenters. When and where will this outstanding event take place? Thursday, September 7 in Brooklyn, New York at a new music venue called, Brooklyn Steel.

According to this TimeOut article, the capacity is 1,800. It is larger than Webster Hall, an East Village staple music venue that closed its doors last month. The article also shares that WB is undergoing renovations. When it comes back, it will be part of the Bowery Presents umbrella. AEG, the company who owns the Barclays, and Brooklyn Sports & Entertainment, acquired the concert hall. I have a brief history with one of the booking agents there, but that story is for another time and place.

As far as the decor, it sounds as warehouse/industrial as it can get. I mean, it is called Brooklyn Steel. As the invitation email explained, they went through hundreds of submissions and selected the best of the best. The finalists have been flown in from all over the globe to compete in front of Craze, Destructo, Mija, The Whooligan, Diplo, Just Blaze, and Mannie Fresh!

Doors open at 7 PM. The show starts at 8 PM. The judges are iconic if you ask me. The first Goldie Awards will be hosted by Harlem-bred rapper Dave East. He’s a tall glass of water.

If you’re around tomorrow and you love live music, treat yourselves. Get a ticket to the first Goldie Awards now. Tickets are $20. Nothing crazy. Plus, it’ll be history in the making. Learn more about the Goldie Awards via this link. 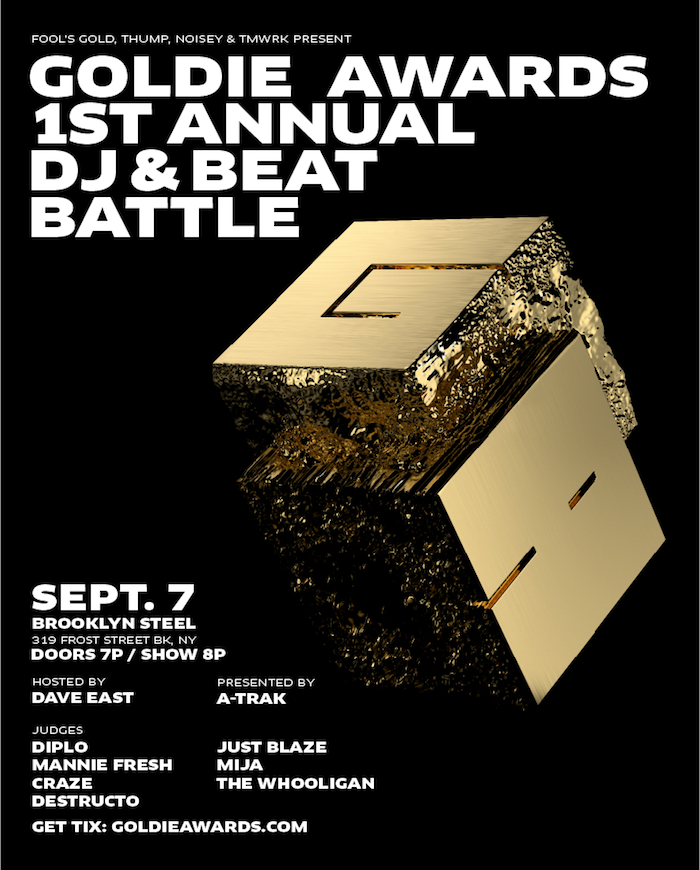