Fred Foster, Freebandz, and Future wish you a Merry Christmas. 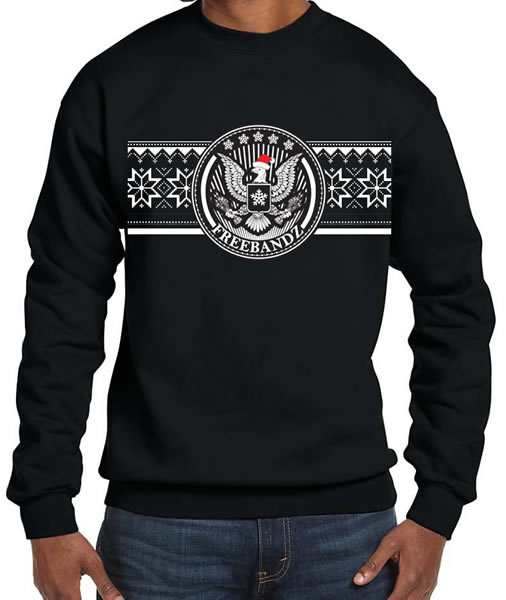 Future, the Atlantan rap star, just launched an Autumn-Winter collection. Though the press release says 2016, I’m pretty sure it’s meant to say 2017. Among the collection are the following: Freebandz holiday sweaters, embroidered varsity jackets, custom denim shirts and more. If this block of text entices you, feel free to shop the collection on the official website. It is a collaboration with a creative director named Fred Foster. According to the press release I received, Future wore all limited pieces from the holiday collection when he was on tour with Drake. View images from the collection.

When asked about the inspiration behind the new collection’s designs, Freebandz Creative Director Fred Foster says – “This collection was inspired by the historic Kirkwood neighborhood where Future grew up. We wanted each garment to somehow reflect part of his upbringing (e.g. with the Varsity) and also share a piece of his Kirkwood roots with his audience.”

Future caps off yet another landmark year with a string of consistent releases including his 4th studio album, EVOL. In February, EVOL became his third consecutive release to bow at #1 on the Billboard Top 200 in less than a year. The project achieved an RIAA Gold certification, while spawning the platinum smash “Low Life” featuring ‪The Weeknd. He followed that up with the gold single “Wicked” as he sold out dates across the country on his headliner, The Purple Reign Tour.

Along the way, he appeared ‪on Saturday Night Live, solidifying his place as a cultural icon. He spent the Summer packing arenas coast-to-coast on the Summer Sixteen Tour alongside Drake. These works come fresh off a vigorous two-year reign with Future releasing a slew of mix tapes including “Beast Mode,” “Monster,” and “56 Nights”——skyrocketing to a Billboard #1 album with the release of DS2 (Dirty Sprite 2) and adding yet another virally successful platinum project under his belt with the 2015 release of What A Time To Be Alive in collaboration with Drake. Future has infiltrated the worlds of music, fashion, lifestyle and culture – proving such by covering magazines such as Rolling Stone, GQ, Numero Homme, XXL, Essential Homme, Mass Appeal and more. Future is signed to Freebandz / Epic Records.