easyJet, Europe’s leading airline, today announced – during a pan-European event at Milan Malpensa, its second largest base after London Gatwick – that it has successfully completed automated drone inspection of one of its aircraft. The tests prove that pre-programmed drones could help reduce the number of hours an aircraft is out of service after events such as lightning strikes compared to manual inspection. 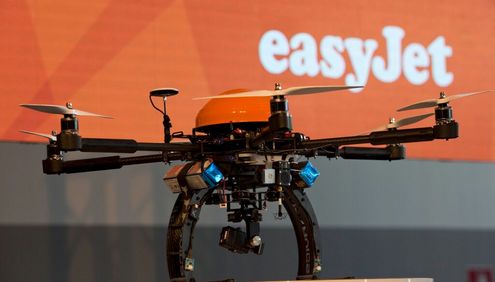 The airline also announced today that it is trialling the use of 3D printing to replace parts within the cabin like arm rests to speed up the replacement process and reduce the storage of spares. 3D printing will be a part of the next generation engines that easyJet has on order. The LEAP engine features 3D-printed parts including fuel nozzles, carbon filter fan blades and ceramic matrix composites.

In collaboration with Airbus the airline will study a solution for prognostics maintenance including services and eSolutions which can receive real-time information from aircraft systems via the ACARS messaging system. This information is then analysed, with fault predictions sent to airlines’ operations teams so they can use it to troubleshoot technical faults as soon as the plane lands or schedule the work into its regular maintenance. This collaboration supports our aim of eliminating technical related delays. We have already reduced these from 10 delays per 1000 flight movements to 6 delays per 1000 flight movements over the past 5 years.

Just as important as the behind-the-scenes innovations, new digital innovations designed to make travel easier for passengers have also been a focus for the airline. These include a new iPhone app and Apple Watch app.