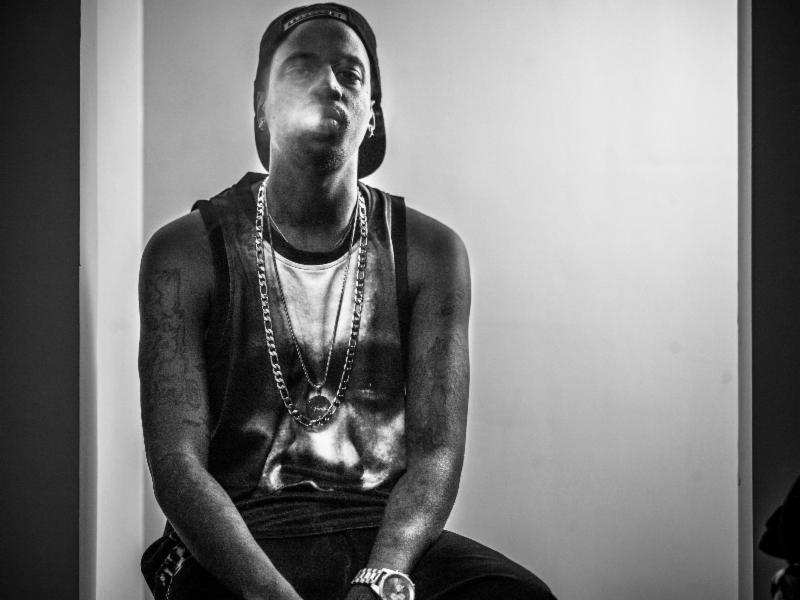 When the intro track “Just In Case/Reelife Sound” transitions (somewhat reminiscent of anime intro songs circa ‘05) it subconsciously hints at the symbolic journey of Just In Case, makes a silent pact with the listener and sets the proverbial tone. “Darkside Glow” follows as a underdog’s anthem of rising despite being wounded and tipsy. “Blessing” is distinguished with its uptempo beat. In “We Belong Here” the dark grace of MP Williams is juxtaposed to Doley’s boastful (not pretentious) rattlings and bids the listeners to believe that he does in fact belong here. “Til We Fall” is an easy favorite, with dope one liners. Its trapboy mantra vibes drips effortlessly into “Drown,” a liquor soaked lack-of-love note with an equally pleasing melody and rich piano keys.

More gentler keys usher in “Tommy and Keish,” titled after the infamous couple from the movie Belly is a tit for tat crazy girlfriend song told in the grand tradition of “Me and Bitch” sans robbery homicide and shitty toothbrush. “I Know Pain” featuring Euro League and James Ashli is wistful narrative of nostalgia, Doley lends a piece of himself here and is one of the stand out songs on the project. “Funeral and Release Date” fell flat production wise and the hook is nothing to write home about. Doley oscilates from a slow to quick delivery on the bonus track “Waking up to Day Dreams” putting his versatility on display. “Bad Guy” bumps like New York Hip-Hop but somehow fights its way onto the project. The last bonus track “Raise Your Weapon” featuring Denzil Porter was sweet and fitting ending to a dark ride.

There are a few downsides to Just In Case. Doley seems to nibble, not bite, at the stylings of Yeezy in “Darkside Glow”, Kendrick Lamar (Section 8.0) “We Belong Here,” Future in the hook of “Funeral and Release Dates” and most noticeably Meek Mill in “Blessed” the hook (and title of the song) veared dangerously close to sounding like a carbon replica of Mill’s “Amen.” Just to name a few. The lyrics in the beginning of “Drown” were sticky. Thankfully, they got sorted out by the second verse. “Reelife Sound” can lose listeners, if they don’t listen pass 1:13 and the beginning was riddled with overused metaphors. “I Know Pain” was a bit too long, despite ending on a high note.

If the intention was to make this EP sound like an LP, it fell short with its repetitive subject matter and lax production toward the second half. In this respect Doley’s wordplay sounds more “stunt actor”, performing similar tumbles and falls in various scenes rather than “leading man” throughout an epic blockbuster. MP Williams while lax, still cradled Just In Case from “Funerals and Release Dates” to “Bad Guys” just as it stooped into it’s stunt act. Doley’s storytelling abilities on “Tommy and Keish” could have made other songs distinct and may have rounded out the completed production. Ideally, if Just In Case was condensed to 9 or 10 songs Doley’s potential for leading man could have been fully realized and he might have achieved the “EP that plays like a LP” sound. “Blessed” and “Bad Guy” threw off EP’s easy going smoker’s delight effect, ironic seeing how “Bad Guy” was rife with marijuana references.

These nitpickings in taste shouldn’t sway you from listening. While Doley lacks here and falls there not one song on Just In Case is completely atrocious. That’s a mark of what could be very well recieved future projects. A good match is made with MP Williams, dabbling with sonic luxury and tailor-fitting sounds to words. While a couple of songs could have been dropped, Just In Case wasn’t thrown together haphazardly. Here resides a sincere attempt to make good music. Even when a style is borrowed or a point referenced one too many times something of Doley’s own wit resonates throughout the EP. He has only just begun to master his pen and find his stylings but knows how to arrange tracks. A solid rookie release, smooth and willful, best enjoyed with a fat L of kush, a snifter of cognac and Knights of Sidonia playing HD on a big screen.

Doley will release his next EP Bond Place Hotel on August 26. Listen to the first single from the EP via this link.