Last night, we were privileged to support and celebrate with Afrobeat superstar, Davido, at his ‘A Good Time’ album listening session. As we arrived outside of the YouTube Space, we noticed the long line filled with excited fans, all eagerly waiting for their entrance to see Davido, as he promised fans a glimpse into his album. The conversation of favorite released songs to that point, as well as, the anticipation for what this album had in store filled the air. When we finally got upstairs, after a brief stay in the line, and as the door opened, we took a step into a room quickly filling with fans and supporters.

As the fans awaited his performance, we were welcomed backstage by Davido and his team. As they were preparing to make that entrance on stage, we were able to get a closer look into the character of Davido. Being the very family and friend oriented guy he shows himself to be, his character was on full display as he welcomed everyone with open arms, talking, joking and laughing with everyone he was introduced to trying to make sure everyone in the room was comfortable.

It was now time for him to enter the stage. We made our way back to the performance area. As he entered, applause and screams of excitement filled the room! The international superstar was here, and from the sound of it, everyone was eager to finally have the chance to hear what Davido was boasting about all year! Just before getting into the album, Davido answered a few questions with YouTube’s own Tuma Basa. The questions covered a long-range from Davido’s upbringing, education, the path expected of him to follow, and his organic, seemingly destined, rise to fame and success in music. He also received a cake as the audience sang ‘Happy Birthday’ to him, be that it was his 27th birthday.

Finally, the moment was here! DJ Ecool began to spin the album’s intro, and immediately the audience started dancing along, and this continued on with every track. He went on to play a few more tracks off the album, including ‘D & G’ featuring Summer Walker, produced by London On Da Track, a very well out together collaborative effort. Everyone was having a good time, dancing and listening, including himself, as he danced and performed his songs.

The night was fun and exciting for Davido’s fans who were able to be there! Check out Davido’s album ‘A Good Time’ out now. 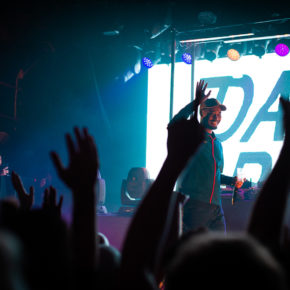