Chanel Dror Breaks Down “R U Jealous Yet” – GRUNGECAKE
Menu

Success is often achieved by those who don’t know that failure is inevitable. — Coco Chanel

Via a very popular Houston-based portal designed for DJs to get the hottest and latest music on the underground scene, we discovered Chanel Dror, a 24-year-old Pop singer looking to brush Selena Gomez’s feathers. She’s a Houston native and a recent University of Texas graduate who majored in Corporate Communications and doubles as the Managing Editor for a Texas lifestyle blog called Camille Styles. Some years ago, she started out as a YouTube sensation that covered songs by Big Moe, Lil’ Flip and Z-Ro, all Houston Rap legends.

She says, she really enjoyed covering Big Moe’s “Barre Baby” the most. She added, “He’s the only one out of all those rappers that really was singing in his songs. Where with the others, I had to make up a weird melody. Strangely enough, he and I have a really similar range. He’s probably like an octave down, so I just love singing his stuff. It’s so fun.”

In regards to working with video director Eve Tarlo and the shooting her first music, she shared a little about having to work through “crazy weather”.

[quote]We had some crazy weather that day. She [Eve] totally kept her cool. It was my first music video, so it was super helpful to work with her. She just showed me the ropes and helped me out a lot. It was great! She was awesome.[/quote] 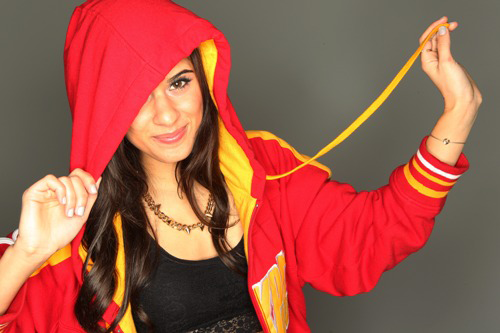 [quote]What a lot of artists are lacking is being able to communicate very well and knowing the importance of email and being on top of your shit”, says Chanel Dror. “I think it’s one of the most important things. To be on top of your communication, and social media, and just being a really dependable person for people to reach out to you. I think that’s something we need to use everyday. I’m always juggling the two, but I love both in my life. But the music thing I’m trying to work on for the moment. It’s a balance, for sure.[/quote]

For someone who grew up loving country music and R&B, she sure does have a natural talent for singing pop. When it comes to collaborating with others, she’s most especially interested in working with “Hip-Hop artists and R&B people”. She loves and “looks up to” Gwen Stefani and Fergie, too. When creating her music, she constantly trying to think in terms of being a performer the interests of young girls in mind and thinking about the things I would love to hear as a young girl or someone who would just like to have fun or what sounds like a good time.

Two years ago, during ACL Week, she opened up for J. Cole. He’s the first rapper signed to JAY Z’s Roc Nation. She counts him to be one of her favourite artists in the world. She remembers her experience being an awesome one.

What are some of the things that make you jealous, Chanel?

I think I get jealous of other people’s success and that’s just an inspiration for me to work harder. I think any jealousy can really be motivation.

Absolutely,” I said. “We call that ‘constructive jealousy’.

We coined that term right now,” Chanel said with a smile. What can you tell me about GrungeCake?

Well, GrungeCake is a magazine. We started out as print seven years ago and I started when I was not even 21 yet. I didn’t really know too much. I went to school for Graphic Design and Communications in New York City and we [fellow classmates and I] were promised these job placements with companies like MTV, VH1 and all of those big communication companies…

That didn’t necessarily happen — well, 6-7 years later, I am writing for MTV but that was via [me] starting and having my own company and making my own connections. GrungeCake is pretty much a platform to show other emerging talents that we’re all going through it and these are the necessary steps and most importantly, you just have to start. Because if you don’t start, you just sit on it — waiting for someone else to do something for you and it will never happen.

For sure. Yes. Amen.

Amen. So, that’s the grunge. I guess we’re in the grunge now. Being undiscovered, not necessarily where we want to be as far as success goes, and the cake being that. Being the success, the limelight or reaching your goal and being happy. So, that’s what it is and that’s what it stands for.

And we absolutely love Ms. Dror. Eternally youthful as she wants to be, watch Chanel Dror as she hangs out with best friend of the guy she’s trying to make jealous!

Also, tune into your local radio stations. You might hear her song on the airwaves… and if you don’t, request it!