Lately — especially this year, Burger King, the global chain of fast-food restaurants has experienced far and wide with its menu. Now, the burger maven plans to unveil the food hybrid: Cheetos Chicken Fries. Unsure of its calorie count, this ‘meal’ seems to target younger people who will hopefully burn off the fat in Physical Education. According to USA Today, “The cheese-dusted chicken sticks cost $2.89 for a nine-piece order, touted as ‘chicken on the inside, dangerously cheesy on the inside.’” 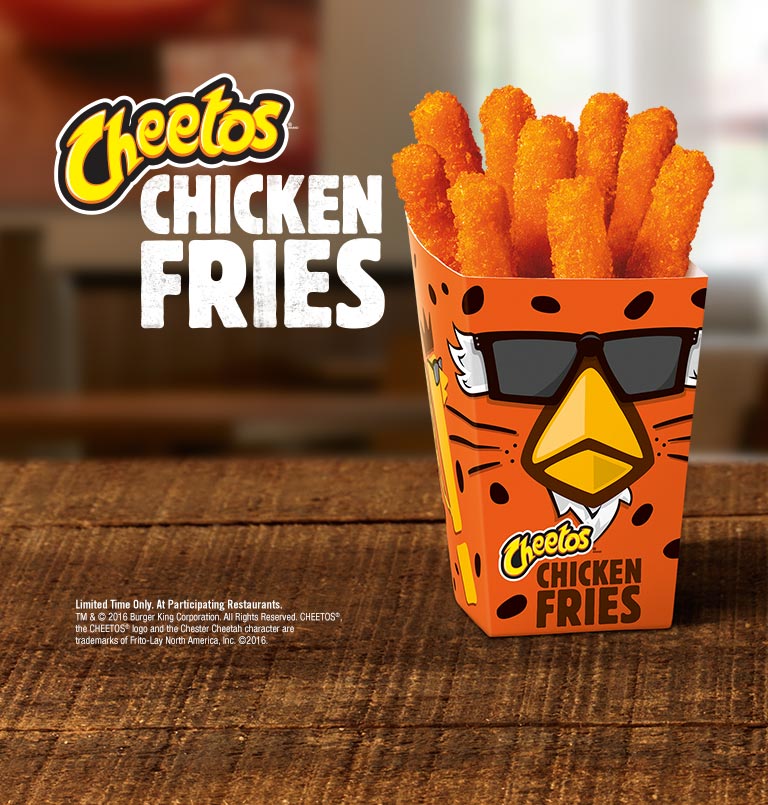 Plenty of news outlets tweeted stories about the food fusion, making jokes and sharing their concern for anyone who eats it. Business Insider called it “absurd”. First We Feast tweeted the following statement. Then, E! News followed up with saying they are “honestly a little scared.” In the article, entertainment journalist Dominique Haikel suggests that the “mashup deserves a special place in hell.” We prematurely decline to agree or disagree.

On Sunday, Burger King shared a photo on Twitter. Underneath the branded image, the text revealed that major news would be available the next day. The company continues to promote the new menu item (Cheetos Chicken Fries) on social media.

Chicken on the inside, dangerously cheesy on the outside. NEW #CheetosChickenFries coming 9.14. pic.twitter.com/QSvG0hrmvP

Two days until #CheetosChickenFries change your life at participating BK's. Get 'em while they last. pic.twitter.com/BIlUICG6K9

The secret’s out. #CheetosChickenFries are coming to select Burger King Restaurants on 9.14 for a limited time. pic.twitter.com/fZSvO8mQ0Q

At the beginning of August, Burger King made an announcement about their new hamburger-burrito composite aptly called a Whopperito. In an article about the new menu item, the Business Insider shared the tortilla “features the same beef that’s used in the iconic Whopper sandwich but with different seasoning to deliver an authentic Tex-Mex flavor.” Adding to the description the publication continues, “The beef is layered with chopped tomatoes, onions, lettuce, and pickles, topped with a creamy queso sauce and wrapped in a flour tortilla.”

If you’re the adventurous type, or you love Tex-Mex cuisine and cheese-flavored snacks and chicken fingers, let us know how all items taste. We hear Burger King’s Mac n’ Cheetos are interesting. We’ll be here, rooting (and praying) for you.