While it is easy to get caught up in the wave of glitz and glamour of high-end fashion brought about by New York Fashion Week, it is even easier to forget the scarcity of Black designers and models during the week-long presentations and within the fashion industry itself. According to a survey by Lindsay Wagner, fashion editor of The Cut, “at the Fall 2018 shows for New York Fashion Week less than 10 percent of the 146 fashion designers who showed were black, and only 1,173 black models out of 7,608 model castings walked”. In an effort to turn a spotlight on how Black inclusion is progressing on the runways, here is a list of four black-owned luxury brands paving the way for Black creatives during this year’s Fashion Week.

I think relatively few people know that the sound of rock and roll was invented by a queer black woman in a church. I wanted to explore what that aesthetic might have looked like if her story would have been told. – Kerby Jean-Raymond

Smith made his formal debut in 2010 during New York Fashion Week with the unveiling of his ‘Water Goddess’ collection at the Society of Illustrators headquarters in Upper East Side. Soon after, the brand quickly gained acclaim amongst designers and celebrities for its sultry essence. Last Sunday, models served modern Western realness as they sported Black Western hats, men’s ass-less chaps, and cowboy boots during Smith’s Spring-Summer 2020 collection showcase at Pier 59. According to Smith, the collection can be described as a couture “hoedown”; an idea drawn from the designer’s favorite movie ‘Showgirls’.

The inspiration is biker, wrangler, sexy, provocative, western, glamour. I want to be the new American sexy. – LaQuan Smith

Haitian designer Victor Glemaud began his career in fashion as a design assistant to Patrick Robinson; soon moving on to work as a publicist for Versace and Marc Jacobs. Launched in 2006, the eponymous collection was praised by fashion critics for its use of print, pattern, and color placement with his knits. Glemaud’s Spring 2020 showcase at TriBeCa’s Spring Studios drew inspiration from designer Stephen Burrows and the eclectic fashion from the ’70s. Models wore cotton and merino-knit pieces featuring large, geometric shapes in a variety of lively colors.

This is a collection of statement knitwear, designed for all people, genders, races, sizes and personalities. — Victor Glemaud

4. NO SESSO by Pierre Davis

Last season, No Sesso designer Pierre Davis made history for being the first openly-trans designer to ever show on the official NYFW calendar. Founded in Los Angeles in 2015, the brand’s name translates to ‘no sex/gender’ in Italian; a name handpicked by the designer to represent the brands unisex clothing. At Spring Studios on Friday night, Davis unveiled her Spring 2020 collection entitled “I’d Rather Rescue Myself”; a line cultivated around the ideas of self-protection and independence. The diverse cast of models donned airbrushed garments, loosely-structured pieces, and vibrantly printed jackets.

A lot of the pieces are more wearable for people who like to dress fun and be a little lavish. And there are also pieces for people who are a little bit more on the chill, casual side. — Pierre Davis 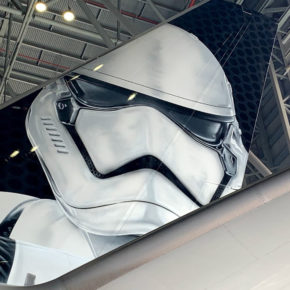