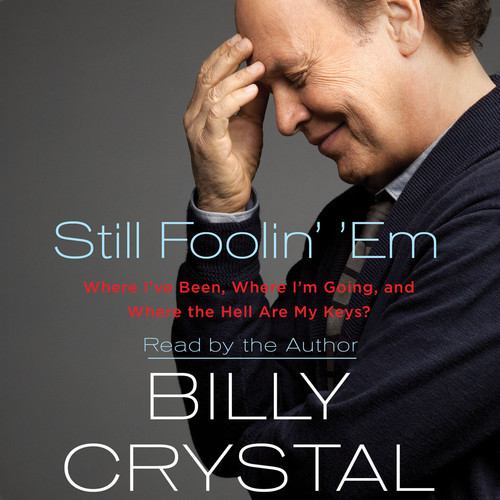 Billy Crystal won three Audie Award wins last night for his narration of the audiobook for Still Foolin’ ’Em at the Audie Awards Gala, including the prestigious Audiobook of the Year Award!

Comedian, actor, producer, director, author, and nine-time Oscars host Billy Crystal’s audiobook: Still Foolin’ ’Em: Where I’ve Been, Where I’m Going, and Where the Hell Are My Keys? (Macmillan Audio) was named Audiobook of the Year last night at the 2014 Audies Gala in New York City. The Audies, sponsored by the Audio Publishers Association (APA), is the premier awards program in the United States recognizing distinction in audiobooks and spoken word entertainment. The Audiobook of the Year award, the highest honor of the evening, recognizes the audiobook that, through quality, innovation, marketing, and sales, has had the most significant impact on the industry.

Crystal’s fellow nominees in this esteemed category were The Testament of Mary, narrated by Meryl Streep, and The Things They Carried, narrated by Bryan Cranston. Crystal also won Audie Awards last night in the Humor and Narration by the Author categories.

Crystal exclaims: [quote]Wow! Three’s the charm! I am so proud to have been chosen as the Audiobook of the Year and to win the other two categories as well against such great audiobooks. I loved writing and performing this book and turning parts of it into a live comedy album like the ones that inspired me growing up. Beautifully recorded and produced by Scott Sherratt and Laura Wilson with music by Freddy Khaw. It’s great to finally get that Meryl Streep monkey off my back. Many thanks to Macmillan Audio for believing in creating a total listening experience. Oh by the way, Father’s Day is coming…[/quote]

Portions of Crystal’s audiobook were narrated in front of a live audience at the Cantor Film Center at NYU, his alma mater, with the proceeds going towards a scholarship named after his late mother. The live and recorded portions of the program are integrated using music that was composed specially for this production by Freddy Khaw, who was selected for this project by Crystal and worked with closely with him on finding the perfect sound. Crystal’s audiobook also earned him a Grammy nomination earlier this year.

Crystal’s narration, which has also been named by AudioFile Magazine as one of the Best Voices in the Author / Reader category of their Best Audiobooks of 2013 list, has already received tremendous praise:

As is the case with many comedians’ memoirs, hearing Crystal’s wisecracks about aging in Hollywood is better than reading them. – Entertainment Weekly

If you have to choose between the print and audio editions of Billy Crystal’s memoir, know this: if the book is funny, the audiobook is drive-off-the-road hilarious. – Publishers Weekly, starred review

And if you like the book, you’ll love the audio. Seven chapters were recorded live by Crystal at an NYU fundraiser. Not many books come with their own laugh tracks. – USA Today

Crystal is a six-time Emmy winner and the star of a Tony Award–winning one-man play, 700 Sundays. Listen to a preview of the audiobook via this link.