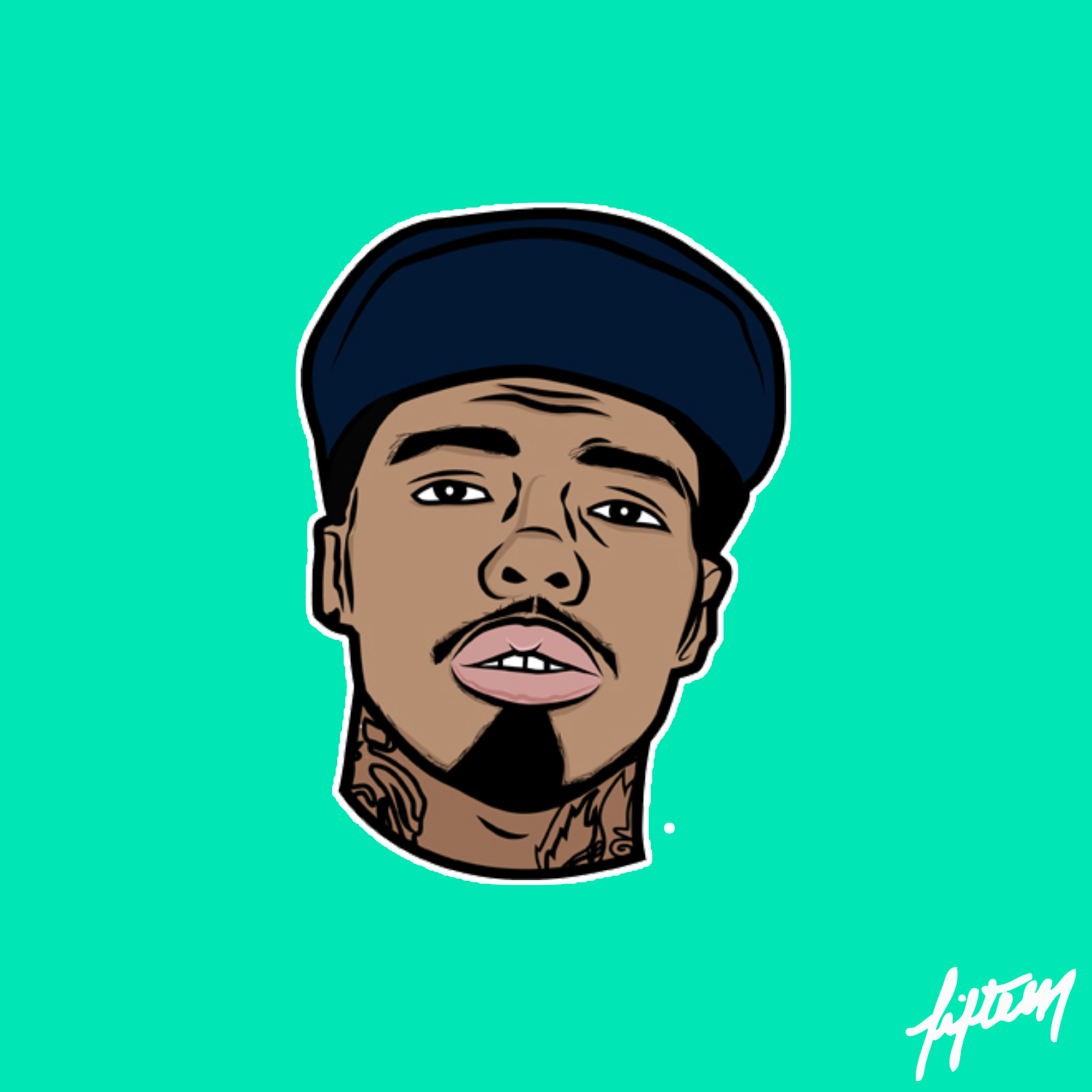 “People used to always ask me who my favorite superhero was.”
“Venom, I’d replied”
“But, he’s a bad guy!”
“Yeah, I know… But, I fucks with him though.”

Nacho’s smile flashes gold as he shifts his weight from one foot to the other, an old habit from days gone by as a high school athlete, and blows into his hands to warm them on this cold, damp Seattle evening.

[quote]The first thing I ever stole was a Batman comic book. It was at the Circle K. I went back home and thought about it. Went back, looked at it again, and went back out. I must have gone in and out eight times. I think the clerk just let me steal it after a while. I must have looked so suspicious![/quote]

Thus began a lifelong affair with super heroes, villains and the fantastic stories surrounding their deeds and misdoings. Nurtured by days spent in Planet X, a local comic book store owned by a family friend that he was taken to so he wouldn’t get into trouble, Picasso’s love of the super powerful permeates his unique brand of coolly arrogant bragger rap.

Cocky and charismatic, Nacho Picasso is the anti-hero of Seattle’s multi-faceted rap scene. Not a gangster, but a hustler. Not a bully, but… More the nicest guy who would ever beat the shit out of you and fuck your girl friend. An admitted womanizer and drug enthusiast who has “been a bad guy, since my dad died” and “a bitch dream, since I was 16 (although he was quick to note that was a mistake and that he “been had bitches since I was a kid”), Nacho is the antithesis of much of the true school revivalism that has dominated the Seattle sound for the past few years.

[quote]I never even wanted to be rapper… I started off a battle rapper because I was good at ranking on people.[/quote]

When asked about people’s perception of “The Town” and what life is like in the rain he flatly states, “Seattle ain’t what you think it is… It ain’t Tom Hanks sending emails to some blonde bitch… and, you can ask the most gangsta nigga in Seattle and he’ll tell you he rides for Kurt! Don’t think you can just come to The Town and run shit! I’ve seen niggas get fucked up thinking it’s all sad songs and beards… and they get caught up!”

Black Narcissus sees Nacho Picasso reunited with producers Raised By Wolves & Eric G of 9th Wonder‘s Soul Council. His fourth full length mix tape in little over a year, Nacho returns with his signature mix of dark humor and deft wit all informed by his fascination with parables of morality that cast the unnaturally gifted in their lead roles. The opening lines of the first track, American Literature, speaks directly to this stating,

[quote]Narcissistic, catch me staring in a puddle, like yes, I am the man, ask the rest, there’s no rebuttal.[/quote]

There are not a lot of MCs these days name-checking ancient Greek myths let alone comparing themselves to Greek Gods, but Nacho is smarter than your average goon and his mythos drenched lyrics are a mix of braggadocio and cultural reference spanning more than some 2000 years of mythology, movies, comic books, and literature — all of various genre, all of which is portray him as the tattooed heir to Ares and Adonis.

[quote]Think about how cool it would have been to worship Greek Gods… like, that’s your religion! These guys were like the original superheroes![/quote]

Rap music has always had an uneasy relationship with authenticity. While “keeping it real” has long been the theoretical gold standard, lyrics are rife with metaphor and hyperbole. Stories told, while possibly inspired by true events, are rough sketches at best and, more often than not, take on the tone of modern day parables with characters that are larger than life. Identities are lifted from real-life gangsters, pseudonyms are created and deeds done are often exaggerated for effect. It’s like what the character of Maxwell Scott said about the west, “This is the West, sir.”

When the legend becomes fact, print the legend. Except, in the case of rap music, the ones printing the legend are the authors themselves. When I asked about his moniker he replied, “It came to me in a dream. I woke up one day, and that’s who I was.”

Both fantastical and yet somehow completely true to who he is as a person, Nacho’s lyrics portray a man who became a rap super villain as a way to escape the pitfalls of a hustler’s life and conquer the world.

[quote]I never even wanted to be rapper, he says sincerely.[/quote]

[quote]I started off a battle rapper because I was good at ranking on people. I’d get pushed into battles by the homies being like “snap on this fool!” And, I’d send’em home to get they shine box. But, when I finally got to the studio I realized I didn’t know how to write a rap song. Something I’m sure a lot of battle rappers must go through… I knew I could write, my father was a poet and I liked to write stories, so I learned how to write a rap songs. We got in the studio, made Blunt Wraps, put it out — no mix, no master.[/quote]

Nacho pauses, smirks, and then states, [quote]And, got this little cult following — A cult following of assholes and shit heads.[/quote] He would then apply this same self-taught approach to his performances.

When asked if he ever had a mentor, Picasso replies [quote]Nah! I wish I did have a Big Homie! That’s why I have Moor Gang. All these little dudes that are filthy and we’re learning it together… I’m just a little ahead of them.[/quote]

If Nacho is the young man who refused to grow up, then the Moor Gang are his Lost Boys. A collective comprised of his brother, cousins, and assorted homies that Nacho “keeps close so they stay out of trouble.” Flashing that devilish grin again he admits, [quote]When I was their age I was in jail and shit, doing over nighters, not telling anyone where I was.[/quote]

Nacho’s rise to prominence in Seattle’s seemingly nascent (Larry don’t kill me) Hip-Hop scene, and the following national attention that has come with it, started after he began working with production duo Blue Sky Black Death. He met Kingston, one half of the team, at a house party one night, and after hitting it off, started hanging out on a semi-regular basis because, as Nacho puts it, “he had the hot tub, and I had the bitches.”

They had hung out for a year before music even entered in to the equation. Kingston knew Nacho’s cousin, Raised By Wolves, who had done instrumental work with him on the BSBD albums, and Wolves had produced Nacho’s “experiment,” as he calls it, Blunt Wraps. After hearing the project a year late, BSBD offer to remix one of the tracks and that remix turned into a new song and that new song turned into For The Glory, the title track off their first of 3 collaborations together. Nacho’s raspy, hypnotic flows sit comfortably amongst the lush synths, frenetic high hats, claps and 808 bass of BSBD‘s production combining to create a sound similar to the after effects of a salvia laced bong hit. The cult leader and his ministry of sound now have an as yet titled fourth project in its embryonic stages. Until its completion, their rabidly loyal fan base is more than content to enjoy the fruits of his most recent labor.

As we hit the corner and hang a left to grab a drink a cry of “Nacho!” shouts out from across the street. Picasso stops and daps out the passersby who all want to know when his next show will be. We cross the street and after grabbing a seat in the back corner of Captain Blacks, I walk to bar to order our Rainer tallboys and Jameson shots only to be tapped on my shoulder by one of the patrons.

[quote]I saw you walked in with Nacho, he slurs.[/quote]

I explain to him that we were doing an interview for an article I was writing and he insisted on letting me know that “[He] never knew that Nacho was a rapper for the longest time. He was just a cool motherfucker that he always ran into around and showed love. Dude’s hella humble.”

It would seem that there is a bit of good in this self-proclaimed “bad guy.”

More From: Beer and a Shot