Bar Prima: Lo and behold, I am far from your finest seasoned wine connoisseur but I can enjoy a glass of good drink like anyone else can. Just don’t give me too much. I’ll fall asleep on you.

Last week, I received an email about a new establishment on the Upper East Side in Yorkville called, Bar Prima. In junior high and high school, I studied the Latin language so I thought: Either I’m going to my cousin’s bar or we’re going to a bar that’s two seasons late—Primavera. (Hopefully, that one didn’t miss you.) At any rate, I replied with interest. Moments later, we found ourselves on the 6 train heading uptown toward 77th Street. It was an easy journey from where we were and it was beautiful outside. It felt kind of like an early Spring day in New York City. As we entered the intimate setting, we were greeted by warm, smiling faces. I felt at home.

We sat at the bar and placed in front of us were well-designed menus, pens, wine glasses and our guy with a familiar face and spirit, Chris Leon. It was time to get to work. Our menu featured 9 wines. See the following below:

Terenzuola Vermentino: It is an organic white wine from Liguria, which is Northeast by the ocean. This selection was fermented last year. It was light on taste and dry. Similar to a seltzer without the bubbles. It is $7 by the glass during happy hour, and $11 regularly.

Menti Vino Frizzante Naturale: It is a biodynamic sparkling wine from Veneto. It is $12 by the glass.

De Angelis Pecorino: It is an organic wine from Marche, which is a hot area. This selection was fermented in 2012. It was smooth with great balance. We concluded that this wine “had shoulders,” and it is perfect for the Fall. Also, I learned that “Pecora” in Italian means “sheep”, that it’s from the middle of Italy, there are 150 acres of it in the world. It is $12 by the glass.

Red Hook Winery Seneca Lake Cabernet Franc: It is a rosé from Finger Lakes, New York. As far as taste, it reminded me of Moscato. (I don’t know which type either. Cut me some slack.) Also, I learned that there’s a duo whose responsible for these wines and one of them is a deep and engaging philosophy professor at St. John’s University in Queens, New York. Even the logo on his bottle is intricate and philosophical. This selection was fermented last year. It is $12 by the glass.

Massoferrato Rosso Toscano: It is a red organic wine from Impruneta. This selection was fermented in 2012. Its name reminded me of Nosferatu. I think I even made a joke about its hue of red and called it blood. It is $7 by the glass during happy hour, and $10 regularly.

Lo Triolet Gamay: It is an organic red wine from Vallee D’Aoste, which is brighter in colour. It tastes like sour cherry and I remember the aroma jumping off of my glass. Gamay is currently only by the bottle.

Colle di San Domenico Aglianico: It is a red wine from Campania. If I remember correctly, it has a mint flavour with hints of tobacco and raisin. It’s bottled at the bottom of Italy, near volcanic as he. This selection was fermented in 2010. It is $13 by the glass.

Villa I Cipressa Rosso di Montalcino: It is an organic red wine from Tuscany, and according to Chris if you ever go there you’ll see bees everywhere! A family of honey farmers have lived there (on six acres of vines) for three generations. It’s all about family, and apparently, their website looks like it was built when www was first a thing. No marketing behind it, just wine and I like that. As I sipped, I felt like I was wearing a warm blanket, good for the cold weather. This selection was fermented in 2011 and aged in oak. It is $16 by the glass.

Erbaluce di Caluso Vermentino: It is $7 by the glass during happy hour, and $10 regularly.

Along with our wine, we enjoyed delectable house marinated olives, prosciutto from parm (served with homemade pickles. Then, we finished with their pear and walnut bruschetta (ricotta on the bottom folded with pepper and honey) and their mushroom bruschetta (marinated mushrooms, caramelized onions, rosemary aioli on the bottom). Did I say delectable?

According to Chris, north of 79th Street on the Upper East is getting younger, which makes Bar Prima a prime location for young professionals. He explained everything. We were lucky to be there. Not only were we being treated to their fine menu prepared by Chef Mango, we were learning about different cities in Italy, rare grapes and vineyards, the different processes achieved to create the product, the weather in certain cities, professors and other people and families that devote their lives to the art of winemaking; I think that’s romantic in itself. Bar Prima just opened in May but it feels like a staple of its neighbourhood. They’ve added food to their menu last month. 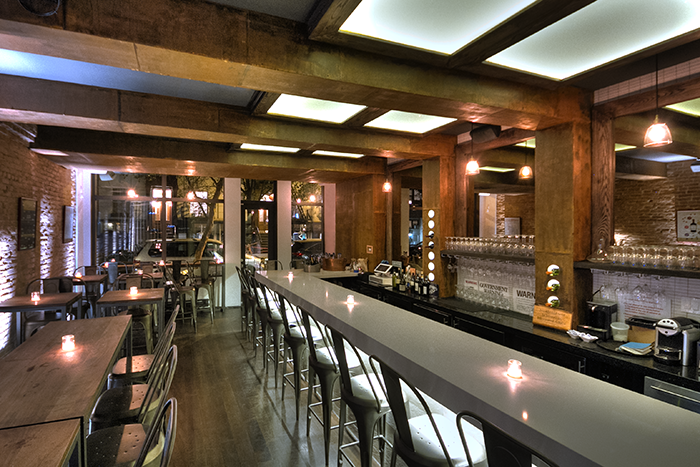 Bar Prima gets its name from its owner. His late wife and he connected over Italian wine for 15 years! Its owner started it as a project.

Before then, I couldn’t tell you much about a Bordeaux Red French Wine but I know when something feels good, and it’s because it is good. I fell in love with the space, the tastes and the staff. I recommend venturing out to Yorkville on the Upper East Side to entertain a client, enjoy it with someone special or just to watch the game. P.S. The music selection was fantastic. Think Indie Pop and Indie Rock: Peter Bjorn and John played as we sipped bubbly.

Bar Prima is located on 81st Street between First and Second Avenues. If you want to make a reservation or you need directions, please call at (646) 918-6917.