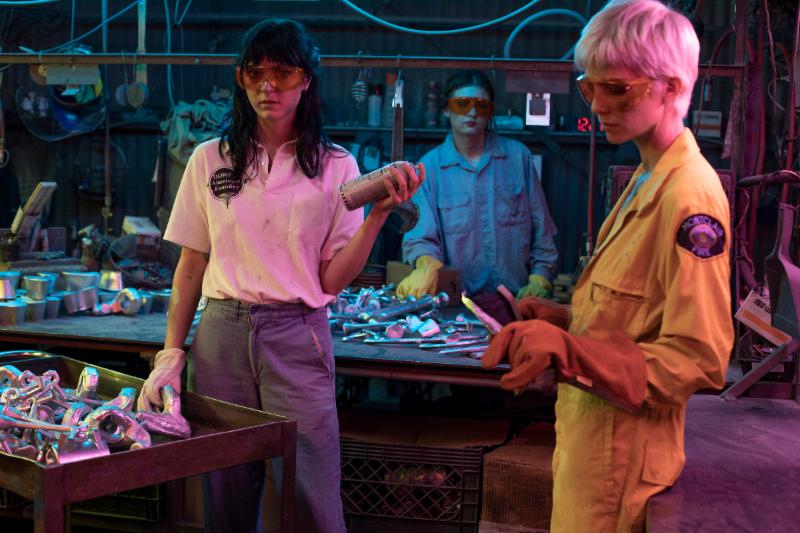 Today, Los Angeles post-punk trio Automatic shares a new video. ‘Calling It’, directed by Ross Harris, is a modern-day take on the Greek Myth of Pygmalion, which tells the story of Pygmalion falling in love with one of his sculptures who comes to life. Automatic’s visual is a Sci-Fi rendition of the same tale. Shot in an aluminium factory owned by drummer Lola Dompé’s grandmother since the 1970s, the video follows the trio as they begin to spiral, slowly losing their minds and growing obsessed with making little men out of aluminium. “It’s a factory run by women” the band says, “and we liked that as the basic concept.”

‘Calling It’ is Automatic’s first song after signing with Stones Throw Records and arrives ahead of a string of shows in Los Angeles. The band is set to play a month-long residency at The Echo every Monday in August, followed by a London show on October 22.

Automatic is Izzy Glaudini (synths, vocals), Lola Dompé (drums, vocals) and Halle Saxon (bass, vocals). The band first met while immersed in Los Angeles’ DIY music scene and started playing together in 2017. Word quickly spread about their explosive live shows and over the past year, they have become a mainstay on the Los Angeles club circuit. Watch ‘Calling It’ above, see upcoming tour dates below, and stay tuned for more from Automatic coming soon.