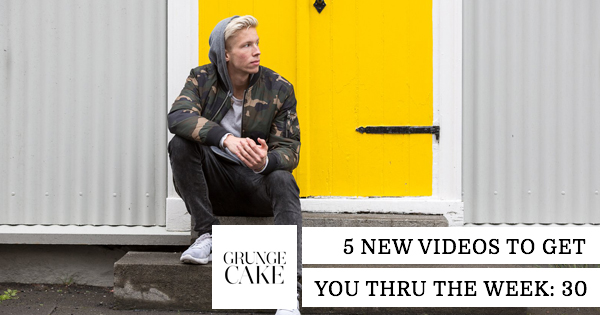 Two days ago, Denzil Porter released the official video for a new track called, “Careless.” At the start of the song, the Bronx rapper goes on about not giving thought to his haters. He could care less about how they feel about his success. We concur, Porter. Stay focused; Do not conceal any of your emotions for anyone. Let them ring through and burn the naysayers. In proper marketing fashion, the recording artist also dons a white baseball cap with the title of his song. We think it is smart. Where can we buy the hat, Porter? Will the money go to you when we purchase? It’s a well-directed music video.

If you like what you heard, check out the full album,
“Semantics of Mr Porter.”

In an epic treatment for “Avalon,” Amsterdam, Netherlands-native artist Eva Simons sings the many reasons why the audacious (figurative) rain will not stop her parade. By the time the hook comes in, she’s dancing in the wet weather as if she has taken part in a rainmaking ritual. It is visually extravagant.

Above all, the song is enjoyable. Without knowing she was kin to a world-renowned accordionist (Johnny Meijer), I couldn’t believe how easy it was to learn its lyrics. Now, it makes sense. Music runs through her blood quite literally. Simon’s father performed as a Jazz pianist. Reggae in the Netherlands blossomed because of her father and his band called Guilt. Her mother, Ingrid Simons, is a former member. Furthermore, her mother went on to build her legacy in the business. She wrote and composed hit records.

Eva Simons may look familiar to you because she is the vocalist on Afrojack’s “Take Over Control.” She is best known for creating music with Moombahton and Surinam Dancehall influences. Watch the Anton van der Linden directed video now.

Ever felt alone? Well, if you have, it doesn’t seem like it can be worst than what this faceless person feels. The masked individual in Hamster’s “City Limits” video looks for a purpose to go on. Luckily, the backing track is motivating enough with messages of pushing forward and not giving up. Any life worth living is one that you can say you’ve earned.

Red and black are the colours of entry. I think of the time we are in our mothers’ wombs before birth. We hadn’t yet experienced air in the way that we do now. We were ‘pure’ and unscathed. Not a bill to pay. There were no boys or girls to crush on yet. We just ate whatever our mothers ate. The reasoning behind the purpose of The Bullseyes’ “Butterfly” doesn’t have anything to do with what I thought. Nonetheless, it makes a connection to butterflies and soulmates. In nature, butterflies are considered to be a thing of beauty. Throughout all of its changes, like us, we are still loved. It is rare that people love us through our metamorphosis, but we cherish the ones who do.

Homelessness is more common than we think. It could be any of us at any given moment. At the start of Satellite Citi’s “Undead”, a couple spraypaints letters onto a car window with red spraypaint. Shortly after that, the car owner [who is homeless] wakes up and sees it. He reads a text from his father. Next, he wandered off in the vehicle. Eventually, he comes across an eighties arcade game. The rest is an animated/live-action history. Check out the official video from forthcoming Negative Space EP. It comes out in February.

Could I be honest with you? Of course, I can. I like the song more than video for “Laces”, but it isn’t what was submitted. Regardless, I am thankful. Have a look at Roni V’s twisted new video featuring dancing by Yael Shaked and Lital Avidor.

Auður’s native dialect isn’t one that we are fluent in—However, we speak the language of love. We are also well-versed in relationships, heartbreaks, crushes, exploration, and being left for dead. Ironically and sadly, it is what makes the best authors and creators. Have you ever heard the phrase: You’re not living life until you have lived? A bit redundant? Perhaps, but it is true. How else will you relate to an array of people?

Respectfully, I can only speak for myself, but the video for “I’d Love” is the outer body emotions unearthed by falling in love. Your mind begins to race faster than your heart. Imagining the best and worst at once, and somehow, we become limitless. Superhuman abilities purchase and replace the puny versions of ourselves. Suddenly, we become what we’ve always imagined—what we’ve always wanted to be; Wearing and living in the costume we’ve wanted to put on.

Pulled away from such fantasy? We crumble without a means of recovery. We are on fire without anyone to extinguish the pain. Nonetheless, given, if we are strong enough to survive the burns, we rise again from the ashes like the Phoenix.