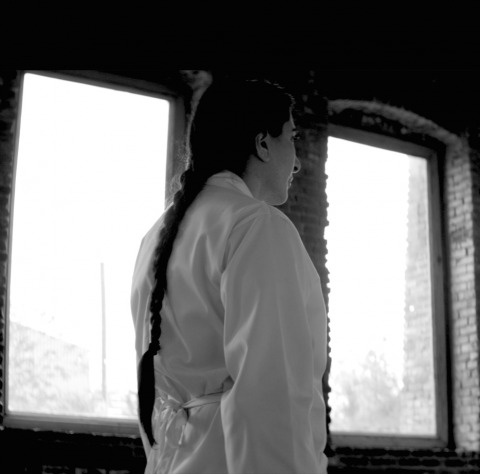 SHOWstudio just presented the world exclusive of a new film by Marina Abramović and adidas. The short is the first ever re-staging of Abramović’s iconic 1970s performance Work Relation. The performance is re-imagined through the lens of the 2014 FIFA World Cup™ and explores the parallels between sport and performance.

Abramović sees a broad affinity between the two; ‘One similarity that I wanted to highlight in this video is the importance of group collaboration. When Ulay and I originally performed the piece Work Relation in 1978, the power of collective strength came through in the performance. I believe that it is important to learn from other disciplines in order to bring new life to whatever it is that you do.’

First performed in 1978, the original Work Relation was a groundbreaking form of performance art unveiled at the Theatre ann Rijn in Arnhem, The Netherlands. The original piece consisted of three sequences, each presenting a unique model for transporting stones from one end of a room to another. Using only buckets and human labour, the three models compare and contrast systems of cooperation and efficiency, with the participants’ bodies serving as the medium. This performance, along with the rest of Abramović’s work, reshapes the role of the audience, bringing us into the experience, highlighting both the limits of the human form and the possibilities of the mind.

The 2014 execution of Abramović’s Work Relation revisits these same themes of the original, while also paying tribute to adidas’ partnership with the 2014 FIFA World Cup. Shot on location at Pioneer Works in Brooklyn, NY, by filmmaker Dustin Lynn, the video reflects on the value of dedication and persistence, and the triumphant endurance and success of the group versus the individual.

In the reenacted piece, eleven performers from varying walks of life reference the total members of a soccer/football team. Together, the performers harness the fundamental principles of the sports world – teamwork, discipline and perseverance – to once again transport stones from one side of the room to the other. Abramović acts as a referee figure, a conductor laying out the rules of the game while the team utilises three different approaches to carry out the same task. Each of the performers is dressed in items from his / her personal wardrobe, along with a uniform of white lab coats from the Marina Abramović Institute and adidas’ celebrated Samba sneakers, a style first introduced in 1950 as a soccer / football-training shoe.

The consistent elements in apparel further explore the idea of partnership, referencing the ‘kits’ or uniforms worn by teams during match play. Abramović explains, ‘I ask the performers to wear lab coats to create a sense of collective experimentation. A willingness to experiment and risk failure is what allows for growth, both on an individual level and on the level of the collective. The lab coats also mute external distractions such as bright clothing, which can deepen the internal focus of the performers. When participants perform the Abramović Method at MAI, they will be asked to wear lab coats for these reasons, as well as to create a temporary community with those who are experiencing the work together.’

The resulting performance, filmed in a black-and-white cinematic style similar to early motion picture experiments of the nineteenth century, feels simultaneously intimate and epic, complex yet straightforward, monumental and relevant. It conjures the ethos of adidas and the spirit of collaboration.