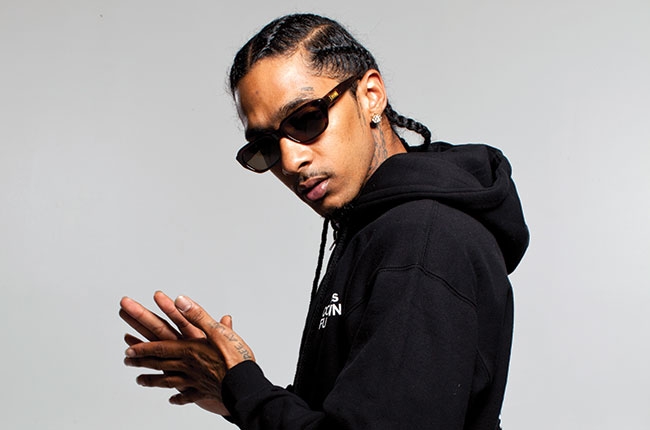 A few years back I spent a lot of casual time in Inglewood, right inside of Carlton Square where I would hear rap stories about a local cat named Ermias Asghedom, whose stage name is Nipsey Hussle. An Eritrean descendent, Nipsey is consistent with his content as far as gangsta rap, which is always something a West Coaster cannot shy away from.

“He has released several mixtapes, including three installments of his Bullets Ain’t Got No Name series, The Marathon, The Marathon Continues and Crenshaw, the latter of which American rapper Jay-Z, bought 100 copies of it for $100 each ($10,000 total)” – Taken from Wikipedia.

Caught in the intersection of Crenshaw Boulevard and Slauson Avenue, Nipsey made life being a member of the Rollin 60’s Neighborhood Crips gang while rapping to make a name for himself in the industry. Nipsey Hussle’s ninth mixtape Mailbox Money drops logic about the streets, his stomping grounds and why it all started, to make money. Just last Christmas I attended a charity drive event in collaboration with Crooks & Castles and YG, where the three creative forces came together to give back to the community by donating their own products including his own self-made clothing line “Slauson Ave Clothing” located on Slauson Ave. Although it’s not common or likely for a gang member to make it out to become a notable famous emcee and businessman, he lets you inside his lifestyle with his new mixtape, Mailbox Money. The package delivers lyrics and notes to take on how to maintain residuals… the legit way.

Awareness
Last year and the one(s) previous before, the nation witnessed and felt the pain of parents and siblings who’ve lost their children and loved ones from police brutality. Trayvon Martin (17), Michael Brown (18), Tamir Rice (12), Eric Garner (43), and many others who were all victims of wrongful death in which Nipsey brings to life in his “50 Niggaz” track opening;

He then goes on into the verse name-dropping his homies by comparing the severity of African-American lives continuously being damaged and executed versus someone of another descent.

One shot got life, Zimmerman got acquitted. Talking about a car jack and we’re talking about a killing. Wonder why we never have faith in the system. Look at young niggas lives, as a waste of existence.

Many and almost majority of most highlighted Black artists decide to just turn the other cheek and not participate into present community issues. Nipsey speaks for all his ‘Neighbors’.

Concept
If you’ve been keeping up with the hustle, then you would know that Hussle has been giving his listeners the game, first-hand. Starting from his first mixtape, Slauson Boy Volume 1, up to his previous work, The Marathon and The Victory Lap, Nipsey paints a picture for us to understand his background and upcoming by his simple motto; “All Money In” (also the name of his independent label created in 2010.)

Delivery
Each song transitions perfectly after each track, while Nipsey bodies the beat in which a few tracks were stirred up by DJ Mustard and THC. Whether you’re in the mood to drive up The Shaw, bang sets while showing off your whip or finding motivation to make a positive impact for yourself, he makes sure his story is fully understood with savvy flows over vamped beats.

Relatable 
He speaks for those who has been there, or is currently trying to exceed. You understand his story and feel his ambition to better himself while surrounding himself with loyal people. He explains a Hollywood lifestyle for a young Black male, coming up from humble beginnings without making the average person feel as if it’s all out of reach.

Lessons
Whatever it is that you may desire, know that it is impossible. Ambition and self-motivation is the free game that Nipsey shares. Stack your bread. Stay loyal. Stay true, and Hussle.

These specific tracks all capture the beats and lyrics I enjoy. I just like real-life situations, real music with real people. There’s something about Dom Kennedy’s sound so I love the mixtape featured track, “Real Nigga Moves”.

My Favourite Quotables from Mailbox Money:

“I sleep light but I dream big, I tend to talk less because I’ve seen shit” — Nipsey Hussle, “Real Nigga Shit” the ninth track from his ninth mixtape, Mailbox Money.

“Had to make it happen, plus I gave my word. Started out the trunk, got it off the curb. Travel around the world, lessons that we learned. Blessings we deserve because all my niggas stayed firmed.” — Nipsey Hussle, “Stay Loyal” the tenth track from his ninth mixtape, Mailbox Money.

“Before you get the shit, you gotta lose it all.  And then you find yourself and see that you’sa God.  And that’s real shit, thousand hundred dollar bill shit.  Front hood to the hills shit, like how the fuck did we build this.” — Nipsey Hussle, “Be Here For A While” the fourteenth track from his ninth mixtape, Mailbox Money.

“And when we do make it, look at how they try to twist itB  ecome the world champ, and then y’all enlist us.  Get rich off of rap, y’all search us for pistols.  It’s like it ain’t no respect ’til we burn up the buildings. Could you just accept if we murder your children? — Nips Hussle, “50 Niggaz” the thirteenth track from his ninth mixtape, Mailbox Money.